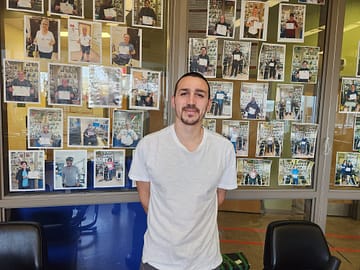 Jacopo grew up in Italy, where he received his Bachelor’s degree in Sport Science from the University of Brescia in 2016, followed by a Master’s in Sports Science and Physical Performance at the University of Verona two years later. He later obtained a Master’s in Public Health and Exercise at the University of Erlangen-Nuremberg in Germany. Since beginning his PhD at the Memory lab, Jacopo has been awarded numerous coveted scholarships from well known institutions such as Fonds de Recherche Santé Québec, Parkinson Canada, as well as several internal scholarships from McGill. Jacopo’s research is investigating the effects of different exercise interventions on sleep quality and architecture in people with Parkinson’s disease; he is also interested in determining whether exercise-induced sleep improvements can further result in improvements in cognition and motor function in this clinical population. Outside of the lab, Jacopo enjoys living in active lifestyle by running and biking outdoors, cross-country skiing, and training at the gym. He also enjoys reading, watching sports, and exploring different parks and cafés with friends.